Introducing linoblock prints into my work has become a bit of a game changer for me.  I keep finding new ways to incorporate them into the big dress pieces, but more and more I am working with them alone.  I love the layers and the shifts in color.  Here are a couple "fresh" ones. 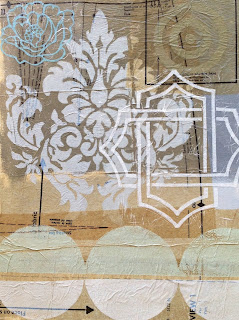 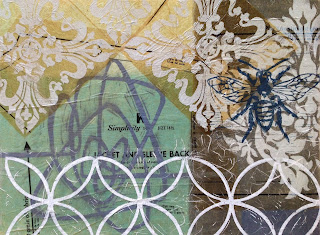 They aren't very big, just 12" x 16" but I hope to be doing some larger, and much larger pieces soon.

Posted by kathrine at 6:43 PM No comments:

Ok, here I am just laying it out here.  This is the story.  After umpteen dozen years of applying to the Winter Park Sidewalk Arts Festival, this year I was (finally) accepted.  I am still pretty sure someone miscounted something somewhere, but I am going anyway.

A few weeks ago I received an email from the show that said in addition to the wads of prize money they already have at this show, there will be one late addition.  The Edyth Bush Charitable Foundation is sponsoring an "Art of Philanthropy" purchase award in celebration of their 40th anniversary.  The award is $5000 and the chosen piece will be on permanent display at the Edyth Bush Charitable Foundation in Winter Park.

Now, to put this into perspective, I don't think I have ever made a piece in hopes of going for a singular award, ever.  It is just too big of a long shot, and usually the prospectus just isn't a good fit.  But this one struck a chord right away.  Before I knew it I had images of some variation of Girl Scouts, or Campfire Girls, going through my head.  Collecting badges for acts of generosity, in spirit and otherwise.

So I started carving "badges" out of linoleum, "helping hands" and "good eggs" and such, and watching the piece come together.  What started out as a "Girl Scout" somehow developed the look of a heavily sponsored race car driver.  But I am good with that, sometimes philanthropy needs a little horsepower behind it.

So here she is, Scott will frame her this afternoon, and she will be heading South tomorrow.  What is likely to happen?  Well, nothing.  Here I am setting the bar sky high, telling the world that I am actually tossing my hat into the ring.  But truthfully, this is a show filled with bad-assed super talented folks.  I may well get a pat on the shoulder, and an "attagirl."  And I will have to suck it up, and tell y'all that I didn't win.  But I'm going to do it anyway.  If you follow me on Facebook, you will be the first to know, and I'll try to post a picture of the winning piece, mine or not.

In the meantime, this weeks collection of (elle)ements are versions of her badges.  You can see them as I post them at www.elleements.blogspot.com

Fingers crossed.
Posted by kathrine at 10:07 AM No comments:

Just so you know, I haven't forgotten about you all. This is probably my busiest time of year, the spring shows are just cranking up, my summer schedule is falling into place, and things are percolating in the studio.   The red dress below has been just dragging its feet to completion. It's been through the whole gamut, from a great new idea, to turned face against the wall for a while. It is back on track, hopefully I'll be able to post it as complete soon.

Then over on my desk is a little piece promised by Monday, and the bottom part of another biggie that I want to have ready for my next show in Winter Park. Oh crap, I just realized that is less than a week away now. Seriously, I should be painting, not talking about it. 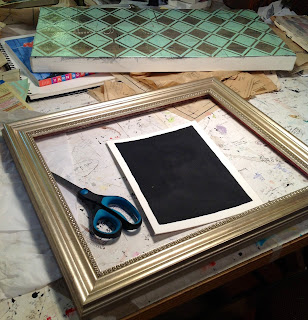 And the bottom picture is the rest of the piece that goes with the blue diamond pattern above. And a couple of little groups of (elle)ements that I am putting the finishing touches on before I pack and ship them. Yes, I get one up every day, but it doesn't always have the final coat of shiny, or it's edges painted black, sorry to burst your bubble.

Maybe I can catch up on blog posts in between shows next week, we are going from Winter Park FL straight over to Houston TX.  We might even stop in New Orleans along the way?  Oh, and if you haven't heard about the (elle)ement blog before now, head on over to www.elleements.blogspot.com  I put up a shiny new (ready or not) piece every day, Monday-Friday.