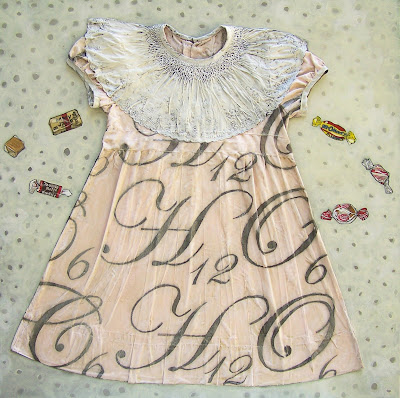 Here's the latest out of the studio, "Sugar" is 30" square. This one doesn't have a long story to it, I was just simply trying to use such a sweet southern name just a little tongue in cheek. A ring or hula hoop of candies circles her waist. The text on the dress? The chemical formula for table sugar. 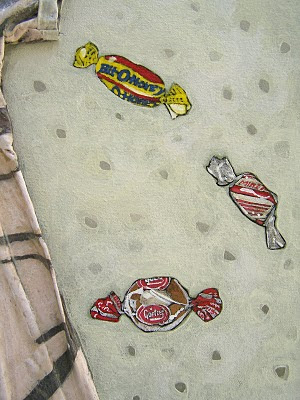 I'll be in New York City on Oct 2nd and 3rd at the Gracie Square Show in Carl Schurz park, hope to see you there!

Posted by kathrine at 5:49 PM No comments: 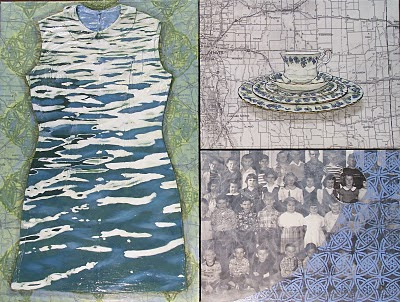 I have been working on this piece both in my head and on the canvas for about 6 weeks now. A record by far. The major elements, maps, a dress, class photo, and china were planned out early. Other ideas, all needed to make the piece "whole" slowly emerged. Quietly knocking on the door of my consciousness, or occasionally barging in when all else failed.

Elizabeth was one of those quiet children. Not particularly pretty, nothing special. She grew up in a time when preparing for life as a girl included things like collecting china for a hope chest. She never wandered far from home. Not even in her mind.

Starting with the larger panel on the left, the background begins as a map, a big piece of what is now "home." A green landscape. Over this is a series of linoleum block prints. A simple pattern that hopefully triggers thoughts of quilting bees, grandmothers, women's work, craft.

The dress on top, a simple house dress is washing over with waves. Ripples really. A not so subtle reference to a fish out of water, or more precisely a water girl on dry land. 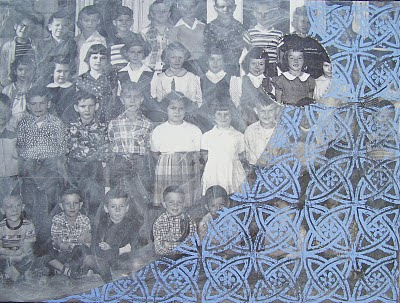 This is a close up of the bottom right panel. A class photo from sometime in the 50's. A girl is singled out, in the spotlight as it were. Linoleum block prints obscure part of the class, strengthening the circle shape that is often repeated in this piece. 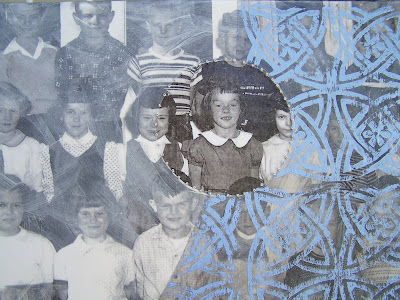 I have named her Elizabeth, only because I'm sure that's what her name would be somehow. In reality I have no idea who she really is. A circle of small silver beads is stitched through the canvas. 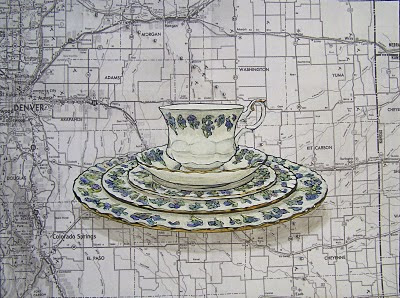 The top right hand panel begins with a map, I chose this part of the world because of the abrupt change in scenery. Driving west you are in the middle of flat nowhere. Miles and miles of nothing, then practically in an instant it all changes, a city, and mountains, huge mountains. How things change. The china floats above. Something that speaks of a simpler time, it gives a sense of stability, family dinners, and somehow, privilege. 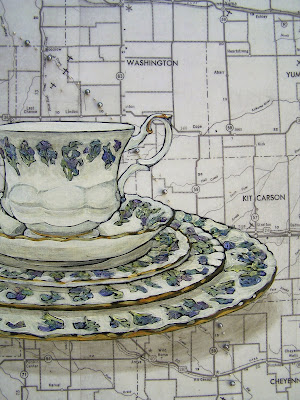 I had a few issues working on this piece. One of the maps in the background that I had copied and spliced, layered with acrylic and set to dry, folded over on itself at some point. I may have folded it...who knows. In any case, it stuck to itself and became a wadded up heap in the trash after spending too much time trying to rescue it...
The water on the dress eluded me for days. I am not sure why, it almost became like that trick your mind plays on you when you study a single word for too long. It somehow loses it's meaning, and makes no sense. Scott told me over and over it was looking great, I would play every game in the book, looking at it upside down, from on top of a ladder, or spin around suddenly just to see if I could catch it with fresh eyes and see what was really there. Finally photographing it seems to have done the trick, because I like it in photos.
The china by the way was the simplest part, I painted it in a couple of days and it just came together beautifully. No hiccups, just poof, done. A gift from the art gods. There is a thin line of beads and freshwater pearls that mirrors the quarter circle on the bottom piece, taking your eye all the way back to the dress.
Sitting back and looking at this piece, wondering why it took so long, why so much drama? I have to think back to my original plan, separating elements in a piece, rather than piling them one on top of the other in layers. Painting water, and china, both for the first time. I think I set myself up for a huge challenge without even realizing it. Talking to a friend lately about what it takes to make it as an artist, he said, "someone asked if I could do that, and I said sure, then I had to figure out how to do it." That seems to be the whole game, set you own bar higher, then start jumping.
Elizabeth is 48" wide and 36" high. $5000