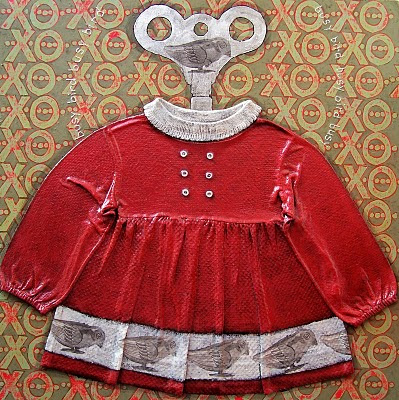 Introducing "Busy Bird"
Steps forward in the life of a painter seem to be few and far between. As much as I know my work is improving over time, the tiny shreds of evidence are not always easy to find. What seems to me like an overwhelming epiphany in the moment, may result in little more than a shrug in the real world.
But this piece had one, perhaps a tiny one, but still it is a small step forward. Rather than use a rubber stamp from my collection to make the background, the lines of x & o's, I carved a small lino block. Not a huge task, those who have known me for many years know how familiar I am with linoleum block prints as they were my medium of choice. I've pulled dozens of multiple color reductive lino prints, never with a press, as I've never had that kind of dough, but with a wooden spoon.
But I don't think I can tell you how much I enjoyed carving that little block, the smell of linseed oil, the carving knife went through like butter. I thought it had been 3 or 4 years since I had carved a block, but I have just surprised myself. I just checked the date on the last lino I remember carving, it says 2001, time flies. Anyhow, this little change, has opened up a bunch of new possibilities, carving any patterns, or text into a block, and treating it like a stamp. Much more original than using store bought stamps, and endless possibilities.

Now back to Little Bird, the star of the show. The dress itself was a little sweater dress. I have never used a sweater dress before, and as I was soaking it in the goo, I really wasn't sure it was going to work, I expected it to stretch into some unidentifiable blob. But it went down very nicely. The key coming out of the top is silver leaf, with an acrylic transfer of a photo of this crazy little wind up bird I have. The bird is also repeated along the hem of the dress. Busy Bird is stitched into a halo shape where the head would be.

I must say this is a bit of a self portrait, it was the last piece painted in a marathon painting push after a really great show, as I was trying to get ready for the next. If you sat me down and asked me my mother's maiden name about the time I finished this, I'm not so sure I could have told you. But it is at times like that when the grand, or even puny ideas seem to come out of nowhere.
Posted by kathrine at 3:52 PM 1 comment: 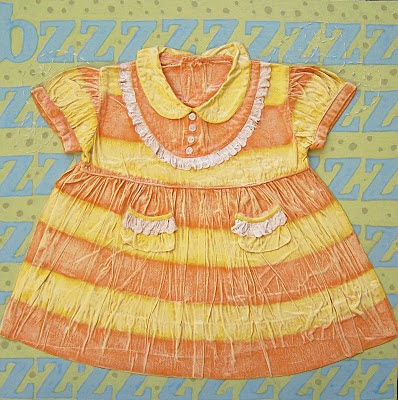 You can tell someone has been to art school when they have an aversion to making something "cute" or "pretty." And I have to tell you, I have this affliction in spades. Usually deep in my dress paintings, there is a little bit of irony, or snarkyness just waiting to be noticed. In fact, when someone walks into my booth and says "Oh CUTE!" (Or even worse, "cute, cute, cute, cute, cute....) I know they aren't really paying attention.

But this one....this one is simply too cute. Little Bee just sort of fell together nicely, it was going through an ugly phase...many of my paintings do, and then *poof* there it was, over the top sweet. And I just couldn't do it, I couldn't find a way to make it a little more mischievous. Or ugly it up a little, it was so pretty sitting there, that to do any of that stuff seemed as mean as poking a kitten.

So don't confuse this with an earlier "little b," where the b is the beginning of a 5 letter word. This one is what it is, just sweet. And I know it will be in a baby room soon, making everyone giggle. I can hear Moms everywhere making little bee buzzing noises, while they tickle someone small to sleep. And I guess that's ok too!

If you click on the image to make it bigger, you'll notice little stitched wings above the shoulders. Now I'm off to the studio to work on the next one, which will probably be a little snarky, just to make up for it. And please, don't tell any of my art teachers from college!
Posted by kathrine at 6:13 PM No comments: 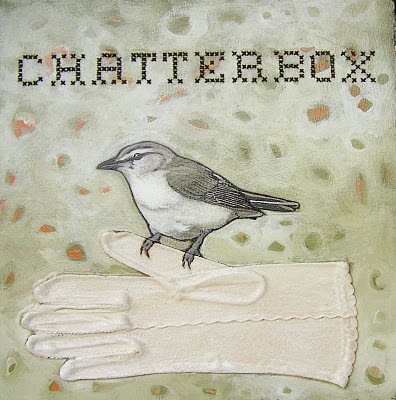 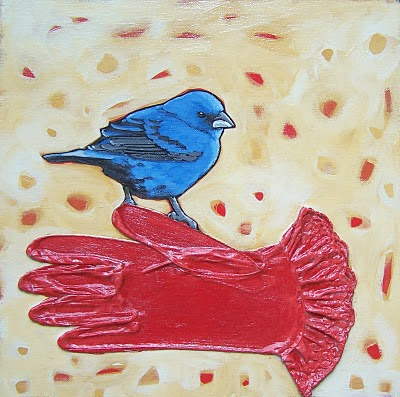 A couple of new birds...

I am having fun with these new birds, the backgrounds are loose and abstract and I love them!

I've spent many years painting pure abstract work, much more of a challenge than you would expect. Making something beautiful and balanced, without having anything representational to "anchor" to is tricky.

But these give me a foot in both worlds, the tightly controlled little birds contrast nicely in both color and style to the backgrounds they sit in. And the dots of color as well as the changes in the top layer of color lead the eye around the composition.

Chatterbox is stitched in cross stitch through the top one, and although the thread looks black in the photo, it's actually a deep greenish brown, mirroring some of the deeper colors in the bird. This bird is a real chatterbox by the way, he or one like him sits on the peak of my studio in the morning and sings a good morning song that can be heard all through the yard!

A female cardinal is the next "bird in the hand" she is currently on the easel, if I get her finished before packing the van for the next show I'll try to put her up. Have a great day!
Posted by kathrine at 12:36 PM No comments: 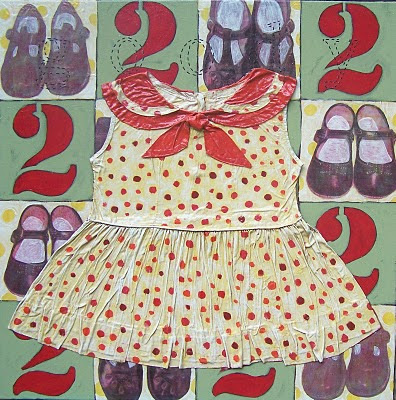 Somewhere deep in the first pages of this blog you will find the first "Goody Two Shoes." It was one of my all time favorites, and she sold either the first, or second time she was shown. So it's time to re visit the theme. This one is smaller, at 24" square. I'm loving the jade green, red, and yellow, colors straight out of the 40's and 50's. The dress itself is also from around that time. "Goody" is stitched along the top in black embroidery floss. And the photos are gussied up a bit with yellow polka dots and a little transparent white to make them pop.

I'm quite pleased with this one, and will be packing it (her?) up to go to Ann Arbor next week, along with many others. See you there!

Goody Two Shoes has sold, and is on her way to L.A. you go girl!
Posted by kathrine at 2:56 PM No comments: 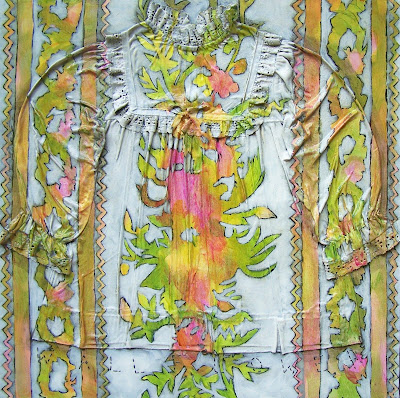 Wallflower is fresh off the easel. It has quite a different look from most if it's "sisters," partly because the dress is more from the 70's era rather than the 40's and 50's. The pattern is a loose interpretation of what was actually on the dress, enlarged to bigger than wallpaper size. What I love about this piece is the contrast or "push-pull" between the transparent color and the opaque ground. I added a bit of a shadow behind the dress just to make it pop a bit, but I already know there will be many, many people who will breeze by this piece and never even know there is a dress under the paint. Most of my paintings hold some sort of surprise for those who are really looking! You will have to look closely though to see her name, "wallflower" is stitched along the bottom hem of the dress in black floss. This piece will show for the first time in Ann Arbor, Michigan at the "Original" show, here is a link to their site http://www.artfair.org/
Wallflower is 24" square.
Posted by kathrine at 12:03 PM 1 comment: