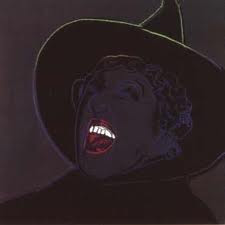 A quick word on artistic influences and my latest piece "Little Black Dress." 15-18 years ago I visited the Vancouver Art Gallery, to see the works of an icon. Andy Warhol. I could write for days about the things I find interesting about his work, but the one piece that wedged itself deep in my brain was his silkscreen of the Wicked Witch from the Wizard of Oz. It was black, on a silvery black that sparkled. I bought the full color catalogue, and this piece was in it, sort of, a black block with teeth was about all you can see.

As a color junkie, I was enchanted by the sheer guts it took to do that piece, not to mention the many other black on black pieces I have seen since. Toss aside the color wheel, all you really have to work with is value. Then forget about all those lighter values, all you need is everything between black, and almost black. This is what I came up with... 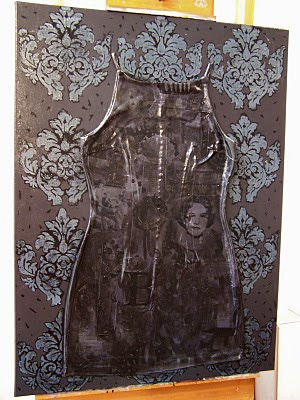 Just for the record, the pattern in the background is a repeated linoleum block print, and is much darker in real life than it appears here. The dress is covered in paint, charcoal, and acrylic transfers. It is layered, and wiped, scratched, and scribbled on. Here is a close up... 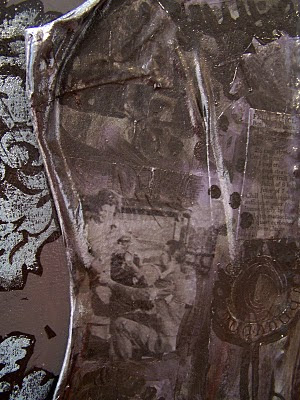 Now, to finish packing the van. You'll find me (and this brand spanking new painting) at Coconut Grove this weekend Booth #352
Posted by kathrine at 1:18 PM No comments: 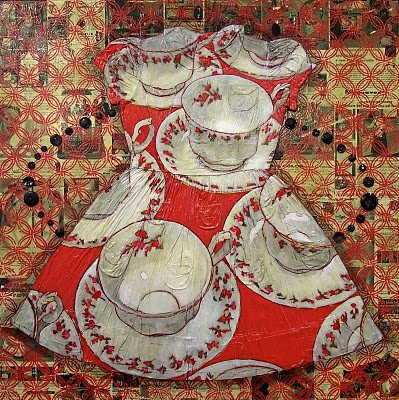 The question of when a painting is finished is more of an issue than you might think. Standing in front of the easel the little voices in my head get quite chatty. One is shouting "quit now, less is more" another says, "you didn't spend nearly enough time on that." "You could push that a little further" is met with "Whoa, quit before you screw it up!"

This was an interesting piece in that respect, because I was happy with the background and was working on the china, a little highlight, a little glazing in shadows, a few dabs of magenta in the roses. I turned around and looked at the piece and WOW! I loved it.

But was it finished?

I'll back up a bit and tell you what is going on in this piece. The background (as I call it, or the parts around the dress) is a collage of ads from the late 50's. On top of that is a block print of a repeat pattern of circles. The circles are woven together, and sometimes they shift and turn into flowers. I was happy with this red pattern, and how the greys in the background gently move your eye around the piece.

I didn't actually have a plan of what to put on the dress at this point. But on my "bulletin board full of crap," (others have beautiful names for this, memory boards, idea boards, dream stations...whatever) I saw a catalogue cover with a painting by Peter Plamondon. It is a huge painting, of a collection of white bowls, some upside down, one filled with white eggs, it's a beauty.

As a side note I was in a Gallery in Chatham on Cape Cod this summer and saw a few of his original works, simply stunning, google him!

But what truly struck me was how that composition would carry the repeated pattern of the circles from the background onto the dress. But I didn't want to copy the idea to the point that I made it look like the piece I just saw. So I pulled out what I have, china. Lots of china.

Without digging too deeply into my head, I have decided that my china collection is becoming a metaphor. It is in a cabinet and in boxes, I have collected it since I was about 12. It has moved with me at least 12 different times, and sometimes not made it out of the boxes before it was moved again. The china has become a reminder that the future I thought I would have as a child is nothing like what actually is. Not necessarily a bad thing by the way!

So I laid out the cups and saucers, and photographed them from above. I painted from the photo. So this is where I was when I had the "holy smokes, this is looking great" moment. I dug through my button collection and laid out the hula hoop shape of buttons (yet another circle) and stitched them through the canvas.

Then I let it hang on the wall for a few days. It wasn't finished.

The only thing the finished piece has, that the earlier version didn't, is the shadows under the saucers. I liked how they floated on the red background, but once I stitched on the black buttons it became more obvious that I needed a little more black in the composition to pull it all together.

One of those push pull moments of a painting, everything you do means you may have to do something else. To balance it out, to make it work. 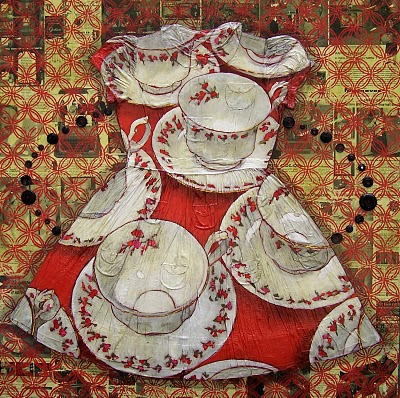 Posted by kathrine at 2:55 PM No comments: